Justin joined Harmers as a Paralegal in January 2021, and is currently a Graduate-at-Law.  Prior to joining the firm,  Justin was a legal researcher to a senior barrister practising in complex commercial litigation, where he gained experience in contract law, class actions and regulatory disputes. He has also worked as a research assistant to a Professor at Sydney Law School and as a legal analyst at a global legal technology company.

Justin is passionate about social justice and has volunteered extensively. In 2020, he spent two months interning at the Aboriginal Justice Unit in Darwin, within the NT Department of the Attorney-General and Justice. Whilst working there he had the opportunity to assist with the development of the NT’s first Aboriginal Justice Agreement, and undertook consultations with remote Aboriginal communities across the Territory. In 2019, Justin served as the Vice President (Social Justice) of the Sydney University Law Society, where he led the development of a number of major initiatives, including the Society’s inaugural Employment Rights Guide for students. Justin has also volunteered at organisations, including the Public Interest Advocacy Centre and Community Legal Centres NSW.

Whilst completing his law studies, Justin was awarded the David Burnett Memorial Scholarship in Social Justice and the New Colombo Mobility Scholarship. He received First Class Honours in Government and International Relations, with a thesis examining the growing influence of management consulting firms in Australian public policy.

Justin has particular interests in industrial relations, anti-discrimination law and forms of insecure and precarious work, including the ‘gig economy’. 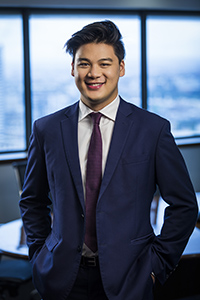