Benjamin graduated from Macquarie University in 2018 with a Bachelor of Laws (Honours) and a Bachelor of International Studies (Russian Language). During his studies, he volunteered at the Elizabeth Evatt Community Legal Centre as a paralegal.

Prior to joining Harmers, Benjamin worked as an Industrial Officer for a major industry association representing local government authorities. He also worked for one of Australia’s largest blue-collar trade unions.

In 2017, Benjamin was awarded an academic scholarship to complete an international exchange at Charles University in Prague, Czech Republic where he studied international law.

Benjamin was admitted as a Solicitor by the Supreme Court of NSW in May 2019 and is also listed in the High Court Register of Practitioners. He works across all of the Firm’s practice areas and has particular interest in working on industrial and discrimination law matters. 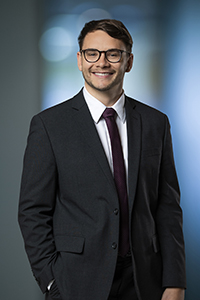